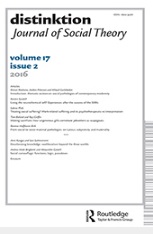 Social pathology was once a mainstream concern of the social sciences, but over the years it has become associated with conventional, ‘old fashioned’, or normatively conservative standpoints. For instance, the social science focus on social pathologies of the early and mid-twentieth century was on specific topics, such as alcoholism, crime and delinquency and (what was seen at that time as) sexual deviance. Conscious of this problematic antecedence and its narrowly ideological and moralistic legacy, this Social Pathologies of Contemporary Modernity thematic section of Distinktion breaks decisively from this anachronistic context, as indicated by its three distinct emphases: the focus on the Social – i.e. historical and cultural as opposed to reductive psychological and bio-medical – sources of Contemporary epidemic pathologies; and, extending beyond the urgency of the new pathologies and beyond the immediate and particular context(s) of the present societ(ies) in which they occur, the analysis extends to encompass principles and processes of global Western modernity as a whole.

By Mikael Carleheden: Introduction: Thematic section on social pathologies of contemporary modernity in a special issue of Distinktion – Journal of Social Theory, 2016, vol. no. 2.