Wired to freedom: Life science, public politics, and the case of Cochlear Implantation 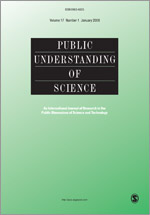 Together with her colleague Kim Sune Jepsen has Margareta Bertilsson contributed to the journal Public Understanding of Science with their article Wired to freedom: Life science, public politics, and the case of Cochlear Implantation.

The article addresses how Cochlear Implantation is now regarded as the most successful medical technology. The technology carries promises to provide deaf/hearing impaired individuals with a technological sense of hearing and an access to participate on a more equal level in social life. In the article, Margareta Bertilsson and Kim Sune Jepsen explore the adoption of cochlear implantations among Danish users in order to shed more light on their social and political implications. They situate cochlear implantation in a framework of new life science advances, politics, and user experiences. Analytically, they draw upon the notion of social imaginary and explore the social dimension of life science through a notion of public politics adopted from the political theory of John Dewey. The article shows how cochlear implantation engages different social imaginaries on the collective and individual levels and Margareta Bertilsson and Kim Sune jepsen suggest that users share an imaginary of being "wired to freedom" that involves new access to social life, continuous communicative challenges, common practices, and experiences. In looking at their lives as "wired to freedom", they hope to promote a wider spectrum of civic participation in the benefit of future life science developments within and beyond the field of Cochlear Implantation. As the empirical observations are largely based in the Scandinavian countries (notably Denmark), the article also provides some reflections on the character of the technology-friendly Scandinavian welfare states and the unintended consequences that may follow in the wake of rapid technology implementation of life science in society.